My Family Planning Journey with Contraception 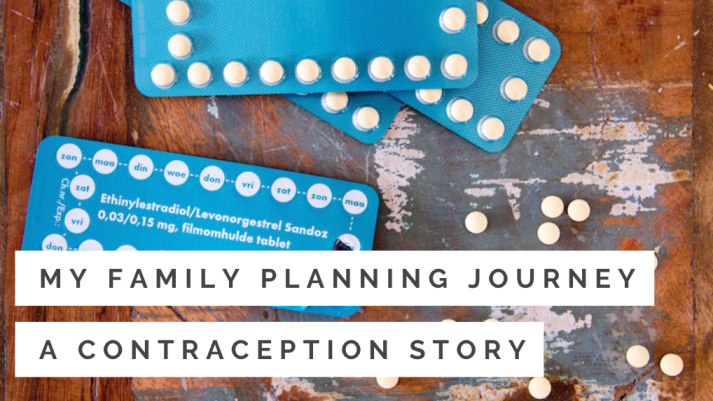 Today, I share my contraceptive journey with you on the one-year anniversary of my intrauterine device (IUD) and at the end of a year filled with the government moving backwards by reducing birth control access and family planning resources for women.

I’ve been one some form of contraception since I was 17 years old (now I’m 28). For many years while I was on my parent’s insurance, I was able to pick up my oral contraceptives (OCP’s) with a low co-pay, and sometimes without any co-pay. Now that I’m on my own insurance, and not having to pay for contraception each month thanks to the IUD, I am even more grateful for prescription/medical benefits. When I think about the women who desire access to family planning and then the government instills beliefs based on religion to prevent this access, I find myself frustrated to say the least. But I also find myself empowered to fight for women to have the same privileges as me. And by the way, having access to family planning should not be a privilege, it is a right.

It’s my hope that sharing my journey will inspire others to do the same. By sharing my story, I want other women to know that you’re not alone in their frustrations in finding the right medications and methods. You’re not alone in feeling confused and overwhelmed with all of the options that are out there, and worried you may not be able to afford or even get the resources you need for contraception.

For my male readers, I hope this gives you some insight into the complexities of what seems simple on the outside. This is not intended to claim that men don’t attempt to understand what women go through, but rather a pragmatic “you just have to be there” approach. Unfortunately, I believe that until biology changes for men to have the same emotional, financial, physical concerns of getting pregnant, empathy has its limitations. Which is a big thing for me to say because I have quite the capacity for empathy. I'll make the bold statement of speaking on behalf of women and say that the way men can help women with family planning is to stay out of our way. And to know that sex isn't just for you.

We need to raise awareness of the emotional, financial, and physical sacrifices and obstacles women face every day to ensure we have the choice to have children if and when we desire. Women need to feel comfortable discussing sexual health and safe sex practices for ourselves. Here’s my contribution to the conversation.

Condoms, condoms, condoms. The rubber we're taught to apply in high school, and taught in pharmacy school to counsel others to do the same. There’s a lot of pressure from men/boys not to wear them. And when I was a teenager and in my early 20's, I felt guilty that it "didn't feel as good" for guys to wear it. Now that I'm 28, I wish I could teach my younger self to teach these guys a lesson and stop enabling this controlling behavior. But alas, hormones and the need to check off "losing virginity" off the list and desire for companionship, or whatever other fantasy exists of being an "adult", takes over. In time, I decided to take it into my own hands and take oral contraceptives. As young as I was, I should have been empowered to make stronger stances on their use. But we all learn in one way or another.

I wonder if there's a survey published to compare the slut-shaming severity between a woman's number of sexual partners vs. number of times a woman has used Plan B. Ladies and gentlemen, I've used this method more than once. I've used it with people I wasn't in a relationship with, and ones that I was. Sometimes I told them so they could split the bill with me, and sometimes I didn't because I didn't want to tell them I wasn't on OCP's at the time. I feel lucky that I became sexually active when Plan B became over the counter and the age of restriction was expanded/lifted.

The reality is, buying this product isn't fun. The first time, I did it by myself and paced around the pharmacy for what felt life forever before purchasing it. And even then, I couldn't look the pharmacist in the eye. Women should not feel this way when purchasing anything unless it is financial irresponsible or damaging to others. When I think about it, it's amazing that women have been conditioned to feel this way when people purchase guns don't.

I wasn’t very good at taking these. I set alarms, and would snooze them, and then forget. I would double up a lot. In hindsight, I should have switched to other forms like the patch, depo shot, or Nuvaring but I liked the idea of having the physical act of taking the pill. It wasn’t an easy journey to find my right hormone combination. There were times I thought, “Why do I have to be the one to take this?”, “Why do I have to be the one to pay for this instead of my partner?”, and “I don’t want to take this, but I don’t trust him to do what needs to be done so I want to be in control of it.”

I went through a total of three different pills before finding the one with the financial, emotional, and physical fit. I also learned how sensitive you can be between generics of the same medicine. As a pharmacist, I found this fascinating. As a woman, I found this extremely frustrating:

The advice I would give is that if you’re feeling different than usual, consider your birth control. I’ve not met a person who found the right fit with the first try. Listen to your body, listen to your mind, and keep yourself accountable by asking questions of any changes to your baseline function.

In December, 2016, when I went into clinic for a renewal I told them about my migraines with aura and realized I shouldn’t have been on estrogen-containing contraceptives at all because of the increased risk for stroke. This came at a surprise that shouldn’t have been, which goes to show that even as a pharmacist it’s hard to take care of yourself without the help of others. I was presented with intrauterine device (IUD) options and discussed them with my boyfriend. I wanted to include him in the conversation in order to update him on why the changes were made, and what it would mean for our family planning future. This was the official end of the oral contraceptive pill portion of my contraceptive journey.

I quickly got an appointment for the Mirena ® IUD (a progestin product) and was told to take ibuprofen 800 mg the morning of the outpatient procedure. I followed this, but it was not enough. It was incredibly painful, an internal pain that I’d not experienced before. I clenched my sheets on the clinic bed until it was over. What I also didn’t realize was how painful the cramps would be afterwards. I made it to my car and my boyfriend had to pick me up (we would get my car later that day) as I laid in the back seat in fetal position. I subsequently laid in bed trying not to move for a couple of hours so as to not induce more cramps inadvertently. I recall telling my boyfriend, “I don’t think I ever want kids if it’s worse than this.”

If you’re considering the IUD, I’m not trying scare you away from it but rather trying to be honest and transparent. As rough as it was, now I know I could have had some muscle relaxants to help with the subsequent cramps so make sure you ask! And now that I’ve had it for one year, I wouldn’t go back to anything else. It’s too easy to forget pills (I proved this multiple times), the Nuvaring could fall out, and the Depo-Provera intramuscular shot makes you gain weight. I like the idea that the IUD lasts years and is immediately reversible without ingesting hormones. And as a plus, most people stop having their period after ~6 months (this has happened to me, too).

As another side benefit, going on the IUD is actually what sparked my interest in skin care this year. When I was on OCP’s, my skin was clear. And I knew that if I went off, my breakouts would come back. So as a result, I embarked on a journey to take better care of my skin for long term benefits and a new mindfulness activity.

It doesn’t matter what your political or cultural/religious affiliations are, Planned Parenthood has a ton of great information and resources for women on sexual health topics including abortion, birth control, emergency contraception, cancer, pregnancy, sexually transmitted infections (STI’s), and more. You can learn more about the different categories of contraception on the Planned Parenthood website.

A woman’s choice and access to family planning means the choice of family and career. Individual institutions and states are progressing forward with resources like paid family leave, paternity leave, and more. Massachusetts recently became the first state to guarantee free access to birth control for all. But until ALL women have the choices they need, the decision between family and career (and as a result, financial independence) will continue to be a gap in this country.

It’s not easy to make these choices with or without government- and culture-imposed barriers. Why make it harder for women to make independent choices? When will the woman’s body cease to be a political and cultural punching bag? Until I no longer need to ask these questions, I will continue to try and shift the conversation and fight for the women who continue to lose out.