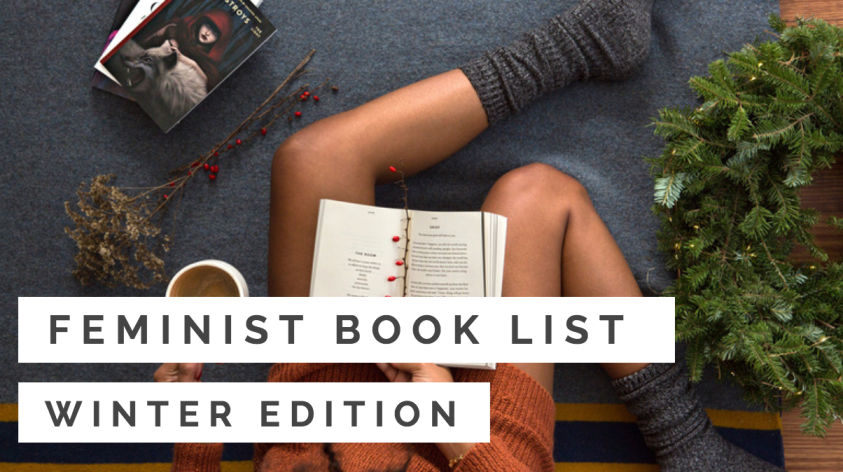 Winter is here, which means unless I don't have to go outside it's hot tea and a book for me. What I love about feminist books is that it helps wake me up to issues I didn't realize existed because of my particular intersections and experiences. Also, it helps to put words to experiences I have feelings about but don't know how to express yet. And finally, sometimes I just want to know that I'm not alone.

If you're one of my male readers, please don't think that because this is a "feminist list" that it's not for you. In fact, you should read some of these too. Every time I make progress in my books I discuss it with my boyfriend. It helps me to be able to share what I learn in a productive way, teaches him so he can join the movement (whether he realizes he is or not), and keeps me grounded if I start getting too deep in the trenches and think all men suck.

I'm excited to start these next year and book club with you all.

Hunger: A Memoir of (My) Body by Roxane Gay

"New York Times bestselling author Roxane Gay has written with intimacy and sensitivity about food and bodies, using her own emotional and psychological struggles as a means of exploring our shared anxieties over pleasure, consumption, appearance, and health. As a woman who describes her own body as 'wildly undisciplined,' Roxane understands the tension between desire and denial, between self-comfort and self-care."

What Happened by Hillary Rodham Clinton

"For the first time, Hillary Rodham Clinton reveals what she was thinking and feeling during one of the most controversial and unpredictable presidential elections in history. Now free from the constraints of running, Hillary takes you inside the intense personal experience of becoming the first woman nominated for president by a major party in an election marked by rage, sexism, exhilarating highs and infuriating lows, stranger-than-fiction twists, Russian interference, and an opponent who broke all the rules. This is her most personal memoir yet."

"Already an international bestseller, this empowering survival guide provides no-nonsense advice on sex, social media, mental health, and sexism that young women face in their everyday life—from one of the emerging leaders in the feminist movement."

The Confidence Code: The Science and Art of Self-Assurance---What Women Should Know by Katty Kay and Claire Shipman

"Combining cutting-edge research in genetics, gender, behavior, and cognition—with examples from their own lives and those of other successful women in politics, media, and business—Kay and Shipman go beyond admonishing women to "lean in."Instead, they offer the inspiration and practical advice women need to close the gap and achieve the careers they want and deserve."

We Should All Be Feminists by Chimamanda Ngozi Adichie

"The highly acclaimed, provocative New York Times bestseller—a personal, eloquently-argued essay, adapted from the much-admired TEDx talk of the same name—from Chimamanda Ngozi Adichie, award-winning author of Americanah. Here she offers readers a unique definition of feminism for the twenty-first century, one rooted in inclusion and awareness. Drawing extensively on her own experiences and her deep understanding of the often masked realities of sexual politics, here is one remarkable author’s exploration of what it means to be a woman now—and an of-the-moment rallying cry for why we should all be feminists."

Men Explain Things to Me by Rebecca Solnit

"In her comic, scathing essay, "Men Explain Things to Me," Rebecca Solnit took on what often goes wrong in conversations between men and women. She wrote about men who wrongly assume they know things and wrongly assume women don't, about why this arises, and how this aspect of the gender wars works, airing some of her own hilariously awful encounters."

This Will Be My Undoing: Living at the Intersection of Black, Female, and Feminist in (White) America by Morgan Jerkins (releases January 30, 2018)

"Morgan Jerkins is only in her twenties, but she has already established herself as an insightful, brutally honest writer who isn’t afraid of tackling tough, controversial subjects. In This Will Be My Undoing, she takes on perhaps one of the most provocative contemporary topics: What does it mean to “be”—to live as, to exist as—a black woman today? This is a book about black women, but it’s necessary reading for all Americans."

The Handmaid's Tale by Margaret Atwood

"Offred is a Handmaid in the Republic of Gilead. She may leave the home of the Commander and his wife once a day to walk to food markets whose signs are now pictures instead of words because women are no longer allowed to read. She must lie on her back once a month and pray that the Commander makes her pregnant, because in an age of declining births, Offred and the other Handmaids are valued only if their ovaries are viable. Offred can remember the days before, when she lived and made love with her husband Luke; when she played with and protected her daughter; when she had a job, money of her own, and access to knowledge. But all of that is gone now. Funny, unexpected, horrifying, and altogether convincing, The Handmaid's Tale is at once scathing satire, dire warning, and literary tour de force."

"In this gorgeous, page-turning saga, four generations of a poor Korean immigrant family fight to control their destiny in 20th-century Japan, exiled from a home they never knew."